The U.S. Supreme Court has once again taken it upon itself to reconsider a landmark civil rights law. Under the Fair Housing Act of 1968 and subsequent legal precedents, individuals or institutions can be sued for racial segregation in housing even if they cannot prove that the segregation was intentional. But conservatives have long argued that segregation ought to be legal as long as it is not deliberate. Now, the court, under Chief Justice John Roberts, also seems to want to see it that way.

The case in question was brought by a nonprofit organization in Texas called the Inclusive Communities Project, which found that state-funded vouchers for affordable housing were being issued almost exclusively in black neighborhoods, ensuring that white suburbs were spared the presence of low-income residents. So ICP sued the Texas Department of Housing and Community Affairs saying it was a violation of the Fair Housing Act. Enter the Supreme Court.

It is clear that some justices feel that a reconsideration of the historic law is in order. Two earlier housing cases that the court wanted to take on were settled by lower courts. The Texas case is the third one in three years in which the court has expressed interest. In January, the court heard oral arguments, and while Justice Antonin Scalia, a stalwart conservative, appeared to ask some tough questions last week of the attorney representing Texas, the final ruling is still up in the air. A 5-4 vote in favor of Texas could end up devastating a law that has been in place for more than 40 years.

Downtown Werribee drowses on a hot day, but inside the local art gallery urgent voices speak of violence and pain.

Zanele Muholi’s work erupts from the suffering of lesbians in South Africa. An artist of international repute, she creates photographs and videos about the women taunted, injured and raped by men who believe “it’s not African” to be homosexual.

A government minister in South Africa once walked out of one of her exhibitions. The portraits that apparently caused offence were nudes, images of white and black women embracing.

The current exhibition is entitled Visual Activism, telling stories that are moving, sometimes horrifying. While other exhibitions in the Midsumma Festival are also overtly political, Muholi’s art is a visceral reminder that intolerance in some countries is more ferocious than in others.

With only a few days to go until its deadline, a petition to the White House to enact a federal law banning the controversial practice of ‘conversion therapy’ has reached its target of 100,000.

The petition has been named after an Ohio transgender teenager who took her own life by stepping in front of a truck last month.

Despite not guaranteeing legislation, the petition increases the possibility of action being taken.

A second petition has also been signed over 330,000 times on Change.org. 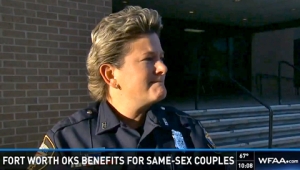 Fort Worth will begin recognizing same-sex marriages on Feb. 1. The city announced Wednesday it is extending spousal benefits to same-sex couples who are legally married in other states.

The city already offers health insurance to same-sex partners, but the decision to begin treating them as spouses will extend equal benefits to other areas, including pension plans. It will also bring the city into line with IRS rules issued in the wake of the U.S. Supreme Court’s decision in Windsor v. United States.

From the city’s employee newsletter:

The City of Fort Worth will be extending spousal benefits to same-sex couples beginning Feb. 1, 2015.

This change will allow the city to follow the IRS’s definition of “spouse” as defined for federal income taxes in the granting of survivor benefits.

Since the city’s retirement ordinance does not specifically define “spouse,” surviving spouses in a same-sex marriage will be eligible for survivor benefits if the survivor can prove, through documentation, that they were legally married to the employee/retiree in a state where same-sex marriage is legally recognized.

The news drew an emotional reaction from out lesbian police Cpl. Tracey Knight. From WFAA-TV:

In a letter to Obama dated Jan. 23, fourteen LGBT-rights organizations urged that Obama’s State Department demand the Gambian government provide more information on the health and safety of individuals who have been detained on the basis of their sexual orientation.

“Some of them may have been released, but an unknown number remain in detention. There are credible reports that at least some of these individuals have been tortured and the lives of those remaining in detention might be in danger,” the letter states. “We therefore urge the United States government to obtain information about the Gambian authorities’ plans to either prosecute or release them.”

The International Human Rights Defense Act, first introduced by Markey last year, would direct the State Department to make preventing discrimination against the LGBT community a foreign policy priority. A special envoy would be appointed to coordinate such efforts.

“When President Obama addressed the nation and committed to defending the human rights of the LGBT community, we made that commitment to the world,” Markey said in a statement. “With the rights of the LGBT community under attack around the globe, we must stand hand-in-hand with them in the struggle for recognition and equality everywhere. It is vital to have a dedicated position in the State Department spearheading that effort. The International Human Rights Defense Act will promote a coordinated effort across the federal government to support our position as a model for defending LGBT and human rights around the world.”

Corinne Lightweaver: I am very taken with the concept of a camp for children who are trans or gender-nonconforming. How did you come up with the idea to start Camp Aranu’tiq?

Nick Teich: Well, I started the camp for transgender youth in 2009. I myself am trans and I didn’t fully realize it until my early 20s, about ten years ago. Now that that the climate has changed and the Internet exists, more trans people are finding their identities and issues affirmed online and they, and their families, are discovering resources earlier. I went to camp as a kid and I really found it a formative experience for me. As I got older, I started to think about kids who know they are transgender or gender-variant and how they could possibly go to camp. I found out from talking to some parents of trans youth that most camps were not equipped to take their children. Many camp administrators didn’t feel comfortable because they didn’t know where they could place the kids in terms of bunking them or which bathrooms they could use. And so the parents were told, “We can’t possibly do this, the child will have to go elsewhere.” Around that same time I was volunteering at a weeklong charity camp and when I told them that I was transitioning, they said I couldn’t come back for the good of the kids. So that was unfortunate. It was learning about trans youth’s lack of access to camp coupled with this incident of discrimination that motivated me to start Camp Aranu’tiq.

Over 4,000 LGBTQ Equality Advocates To Convene in Denver for Creating Change Conference

DENVER, CO, January 30, 2015 —The National LGBTQ Task Force has announced that over 4,000 lesbian, gay, bisexual, transgender, and queer (LGBTQ) people and allies are expected to attend the National Conference on LGBT Equality: Creating Change. Organized by the National LGBTQ Task Force, the conference will take place next week on February 4-8, 2015 at the Sheraton Denver Downtown. Creating Change is a unique five-day experience consisting of daylong institutes, dynamic plenary sessions, over 350 workshops, and more. Key conference highlights include:

WHAT: LGBTQ Latino Institute (daylong training)
WHEN: Thursday, February 5, 2015 at 9 a.m. – 6 p.m.
WHO: Over 100 LGBTQ Latino activists from across the U.S.
Spanish-speaking participants available for interviews

VISUALS: Thousands of LGBTQ activists from a wide spectrum of backgrounds, dozens of vibrant exhibitors in the exhibition hall, eclectic artwork displayed inside art studio space, hundreds of workshop rooms filled with lively discussions, and the “Shower of Stoles,” a unique collection of liturgical stoles and sacred items representing LGBTQ faith leaders.

Live video stream, including exclusive interviews and features, will be available during the conference at: http://www.thetaskforce.org/live.

For more information about the conference please visit http://www.creatingchange.org.

To learn more about the National LGBTQ Task Force, visit us online at: http://www.thetaskforce.org.

Last Friday, Paula Neira received an unexpected but welcome surprise in the mail. The Navy had officially approved her request, filed in March of 2014, for a name change on what’s known as a DD-214 — the military form that veterans present as proof of service whenever they apply for jobs or a variety of veteran benefits and services.

“I was expecting a fight,” says Neira, a former Navy lieutenant who graduated from the Naval Academy in 1985 and served another six years before resigning her commission in 1991.

Despite serving with distinction and amassing more than 20 military decorations, Neira anticipated the Navy might take its sweet time on her request. That’s because she had officially served in the Navy under a different name but underwent gender reassignment surgery in 1995 after leaving the service. Military regulations don’t allow transgender Americans to serve in the Armed Forces. Still, an estimated 140,000 of the nation’s approximately 26 million veterans are potentially transgender.